Bamboo is the deliberate choice for today's engaged consumer who wants quality
combine with good taste and an ecological purchasing pattern.
Solid bamboo is a sheet material that is created by gluing or pressing strips of bamboo together.               The material has a number of remarkable features.
It is not only beautiful to see, but also:

Bamboo is the most environmentally friendly type of wood.
And actually it is not wood, but grass: the plant keeps its roots when it is covered.
The plant does not die off, the shoots stimulate young shoots to come out.
Partly because of this, a square hectare of bamboo yields 30% more oxygen than wood! 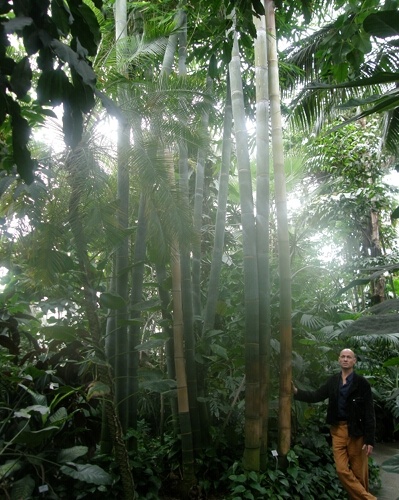 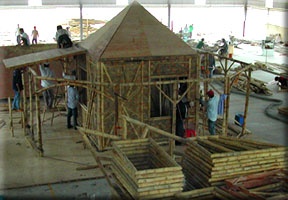 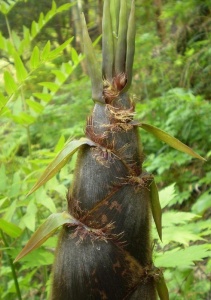 Whoever is looking at a bare garden and wants to have green as quickly as possible, has no choice but to use bamboo. That must then be a 'walking' species, one that steers its rhizomes in all directions. Some bamboos are so friendly to show through stalks above ground where they have come. But there are also those who expand their rhizomes in the genie. Then you see somewhere a tiny stalk, while the whole garden and with a bit of bad luck also that of the neighbors is already full with underground foothills.

It is these restless hikers who have given bamboo a bad name. Because who wants a plant in his garden that is so dominant that other plants are no longer used?

Yet the fear of bamboo is not entirely founded, because there are also species that form neat pollen and remain quietly in one and the same spot. Especially in small gardens and in the vicinity of foil ponds polormers such as Fargesia, Yushania, Thamnocalamus and Chusquea are therefore the best choice. Because there are many species of these bamboos in circulation, it is impossible to mention them all. I would say: go to a bamboo grower and get advice on the kind that best suits your garden.

Most other hardy bamboos proliferate. Sasa, Pseudosasa, Sasaella, Phyllostachys, Pleioblastus and Indocalamus tesselatus in particular can not be trusted. If you want to have such a restless type in the garden, but do not argue with the neighbors, then you will have to keep him in check. Do not do that with ordinary anti-root cloth, plastic foil or corrugated sheets, because these bamboos penetrate right through them. 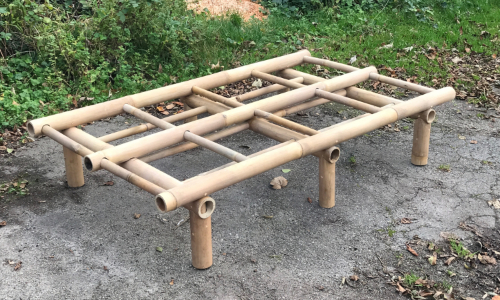 What does help is to plant them on an island, homemade or not, because the rhizomes can not stand water. Is that something too much to ask, then the plant to curb concrete or steel plates. Make sure that the underground boundary is closed hermetically, because one weak spot and the bamboo is already making its way through the garden, and through that of the neighbors. What also helps is a special root barrier made of polyethylene (HDPE), with which you can make rooms where the bamboo can not be removed. Such a cellar does not have to be deeper than 60 centimeters, because otherwise the rhizomes do not come. Let an edge of an inch or five protrude above the ground, otherwise the foothills will still run away.

Well, and then we also have to talk about the flowering of bamboo. Fortunately they do not do that often, some species even once every hundred years. But if they do, it is an immediate end to the polishing bamboos. In their short offshoots, so little reserve food is stored, that after the exhausting process of flowering and seed formation, they have no more money and die off. The proliferating bamboos during flowering bloom on the food supply that is in their long rhizomes. After doing things, they just pick up again and eventually form new shoots.

The tricky thing about flowering bamboo is that our bamboo varieties are descended from that one mother plant that took plant collectors from China or Japan a century ago. For example, Ernest H. Wilson introduced a bamboo from China in 1907, which he named after his daughter Muriel. This Fargesia murieliae has since intensively multiplied, with the result that the hereditary characteristics of all Fargesia's murieliae in our gardens were identical. The fun lasted until 1995, when they all started to flower almost simultaneously. In 2005 it was Fargesia nitida's turn, which had been brought in 1886 by a Russian plant hunter from China.

Fortunately, foresight spirits have collected the seed from both bamboos and raised a new generation from it. Because many seedlings are unfortunately less healthy and vital than the mother plant, you can best buy them at a specialized nursery. The great advantage of these newcomers is that you will no longer experience their flowering. Because that is only about a year or a hundred.

Hiroshima, 1945. A bomb like no other. Total devastation. But among the remains of what once was such a beautiful city, some hopeful green blades stuck out of the ground. The first sign of new life: bamboo. A super grass, but not necessarily super-sustainable.

In recent years, the bamboo production process has undergone a development. Thanks to the introduction of new techniques and the continuous quality improvement of the semi-finished product, the material has taken off on the European market. In addition, the diversity of the application in the type of products has changed radically. In the past, you only saw bamboo furniture of Asian origin, nowadays you also see bamboo in the shop more and more, processed in a wide variety of products.

Its popularity owes its material mainly to its green image: it is seen as an environmentally friendly substitute for (hard) wood. One of the reasons behind this is that bamboo grows much faster than wood and therefore can produce more material in the same time. There are known observations of a species of bamboo with a growth rate of one meter per day.

Other sustainable benefits are that soil erosion can be prevented by planting it (the extensive root system provides a stable soil), drought can be prevented by retaining water and a lot of CO2 can be absorbed, which in turn is positive for the greenhouse effect. Finally, bamboo is also good for the fauna. It is not only the endangered panda that is found in bamboo forests; also various birds, monkeys and wild boars are dependent on the grass species.

In addition to the environmental benefits, bamboo can also be socially interesting. Because bamboo grows all over the world, the material is amply stocked in developing countries. The so-called 'poor man's material' can be processed with inexpensive tools and simple techniques to be learned. Bamboo is therefore ideal for grassroots projects to combat rural poverty. 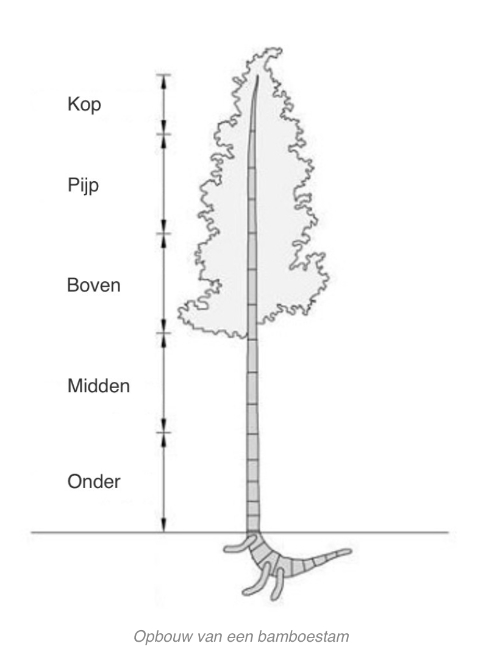 But how sustainable is bamboo actually really? The benefits described above seem only to argue for the use of bamboo wherever possible. However, it is forgotten that there is also a dark side to the story. This mainly relates to bamboo that is industrially manufactured. Important energy-consuming processes in the life cycle of industrial bamboo are: the preservation of bamboo, the large number of production steps that are required, and the transport from Asia to the Netherlands. Depending on the production process, environmentally unfriendly substances such as glue, preservatives and fillers are used. And then we are not even talking about the bamboo waste that is created as a result of splitting, planing and sanding during the production process.

Although bamboo is often considered wood, it is a grass. This can also be deduced from the scientific classification of bamboo. The official Latin name for bamboo is Bambuseae and it forms a tribus of the grasses (Gramineae or Poaceae). The more popular name bamboo is originally from Malay.

There are more than a thousand different types of bamboo. The dimensions vary enormously per species. The stem length can vary from a few centimeters to thirty-five meters, while the stem diameter lies between a few millimeters and twenty-five centimeters. Bamboo stems are often hollow with the strongest fibers on the outside. The hollow spaces are interrupted lengthwise by so-called nodes (thickened) where leaves stick to the outside. If only the strength is considered, it can be said that nature with bamboo has produced an efficient design. Due to the construction, bamboo is very light, but strong, stronger even than steel.

In terms of energy required for production, bamboo is a male compared to concrete or steel. Calculated briefly by the bend, only one eighth of the production energy of concrete is needed to convert the grass into a workable semi-finished product. With respect to steel, which has to be mined during the production process, melted, alloyed, cast, rolled etc, this is even about a fifty-third part. However, the comparison is skewed when you think about the technical life of bamboo. Well maintained and preserved bamboo can last for thirty years, but in general it is shorter than with concrete and steel.

A better comparison can be made with the direct competitor of bamboo: wood. In a scientific study carried out by Pablo van der Lugt at the Technical University of Delft, the durability of different types of bamboo sheet material was compared with that of wood. By means of an analysis of the life cycle, a comparison of the environmental scores is made on the basis of energy consumption, material use, emissions, etc. during production. This showed that the bamboo plate material does not have the great environmental benefits of the bamboo stem, and in comparison with sheet material of wood sometimes even scores worse. Bamboo is therefore the least harmful when it is used in its most natural form (as a strain) and even then preferably in the region where it is harvested.

This does not mean that bamboo is a material that can be avoided. However, careful consideration must be given to the use of the material per product design. Bamboo is and remains a renewable raw material. If you add that wood, steel and concrete become increasingly scarce as a usable material and that more primeval forests disappear with the hood of hardwood, bamboo seems an interesting alternative.

Cart 0
Top
has been added to compare.
has been removed from compare.
Continue shopping Compare